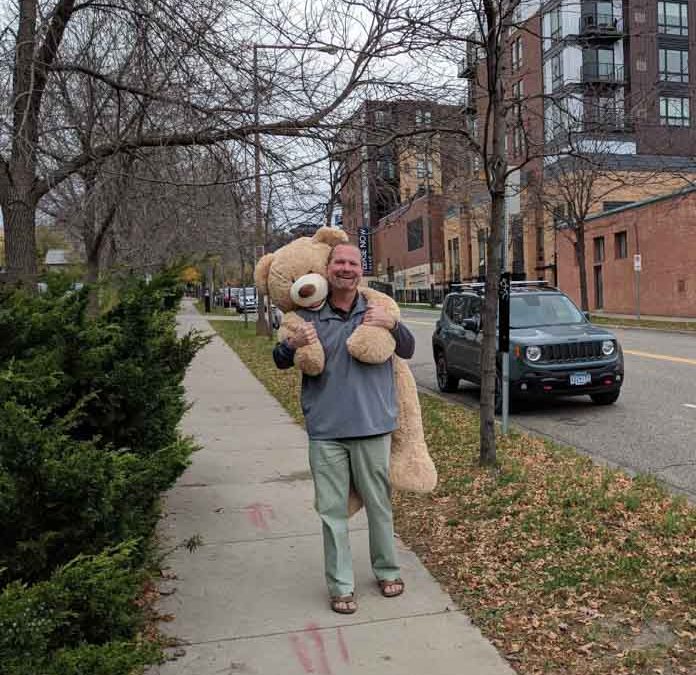 With office traffic at an all-time high, Sharper Management hired a full-time greeter for the front reception area- just in time for the Holiday Season. Bearnard has started his tenure at Sharper Management with a flair unlike any other, walking the streets of St. Paul (see accompanying picture) and visiting long-time employee Kieth Schultz while cheering up children and hospital staff along the way.

Bearnard comes to Sharper after spending a lifetime in China, traveling the open seas, and finally settling in Eden Prairie. His imposing 4 foot 6 inch frame is nothing but cuddly and fuzzy. He never has a negative word to say and constantly smiles at life as his head is often tilted in an all-knowing manner. His demeanor is similar to a perfect community manager- engaged, caring, and listening to every small detail. Remarkably since his hire date, his response time to phone calls and emails has never been an issue. Further, his attendance is inscrutable and work ethic unparalleled. He is always prompt- exactly where you want him to be.

When asked, Sharper management conceded that they “gave in to his somewhat awkward request for a five-week equivalent to rest during the winter.”

Some fun facts about Bearnard are:

Dan Cunningham, CEO of Sharper had this to say about Bearnard: “He is the consummate professional, never has complained and is happy wherever he ends up. There is no drama with Bearnard, just happiness. Everyone loves him.”